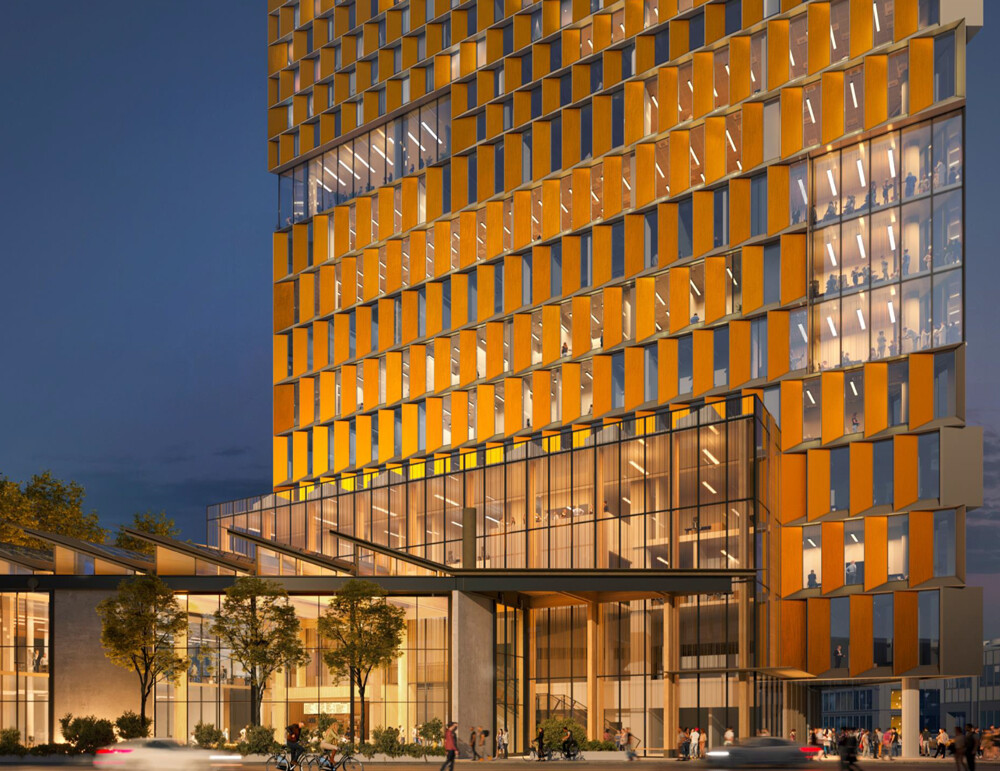 Kelowna city council has thrown its enthusiastic support behind UBC Okanagan's plan for a downtown campus tower up to 46 storeys high.

If ultimately built to that height, it would not only become the tallest building in Kelowna and the tallest between the Lower Mainland and Calgary. Following a public hearing that ran a little more than three hours, council voted 7-1 to approve creation of a specialized comprehensive planning zone, CD28, with only Coun. Charlie Hodge opposed.

"I was absolutely over the hill thrilled when we found out UBC campus had an interest in coming downtown. This huge for our city and hopefully for UBCO, but I had not idea at the time that it would morph into a 46 storey development, " said Hodge who marveled at the look of the building. "I recognize down the road it probably won't seem that odd, it will be part of a developed downtown with highrises everywhere.

"I don't see this being far enough back for 46 storeys and I don't feel the timing is right." About two dozen people, most speaking out against the project, addressed council during Tuesday's public hearing.

Many spoke of safety concerns around the potential for firefighters to properly fight a fire in a 46 storey building. Others spoke about the heat island affect a building of this size would produce and other issues around climate change and the environment, while others questioned UBCO's intentions to utilize the 500 units of housing just for students and staff.

The handful speaking in favour suggested the building would be an incredible opportunity for the city in having a world-class university campus downtown, and a way to help students experiencing the housing crunch in the city.

UBCO principal and deputy vice-chancellor Lesley Cormack said the 500 units of housing would help to alleviate the student housing waiting list at the university, which has grown from 500 to 1,300 over the past two years.

Aubrey Kelly, president of the UBC Properties Trust which is funding the project told council unlike other projects of this kind which receives provincial and federal grant funding, this campus will be solely funded by the university trust.

"We are pushing the limit." Kelly did admit rents would likely be below market value. He said only students and those involved with the university would be able to rent units within the development. In the summer when enrolment dips, the university says it hopes to rent the units out on four month contracts.

Airbnb-style short-term rentals will not be permitted.

Speaking to the numerous questions about safety within the building, Kelowna Fire Chief Travis Whiting says the fire department was part of the ;process on this application as it is with any building in the city, providing comment on code and building compliance. "Modern highrises are built to a higher standard than previous and have a lot more safety features within them that allow things like egress, smoke control and residential sprinklers that are now mandated and critical in our protection of these types of buildings," said Whiting. "We do have a number of towers in town and we do have plans in place for those buildings and will continue to pre-plan buildings like this to work within these structures.

"These new buildings don't burn the way they did 25 years ago because of the very nature of construction and the ability of fires to be contained to the unit of origin or floor of origin and give us the opportunity to manage those incidents."

In his support of the project, Coun. Luke Stack pointed to the unique nature of the building, saying the intent is to construct a "marquee building" in Kelowna with substantial design features. "We have been encouraging UBCO to come downtown for years. We've been looking for a way to bring students into our inner core and we were so excited when UBC got established but we always believed we needed to have a downtown connection," said Stack. "To finally see a downtown connection is huge for the city. I just wish it was a little less controversial because I actually think this is an amazingly good news story for our city. "It's what we need and what I have been trying to achieve for the many years I've been on council."

Coun. Brad Sieben called it a tremendous opportunity while Coun. Loyal Wooldridge called the project the future of Kelowna.

Mayor Colin Basran added the 46 storey height allowance is an exception, saying he doesn't see the city approving many more of this height.

The decision of council did produce one tense moment when Basran asked one woman to leave the council chambers after she loudly voiced her displeasure with council's comments, saying they are ruining the city.

The Doyle Avenue campus is expected to house more than 350 students within the nursing and social worker programs as well as those within programs around the art gallery. There will also be a few hundred faculty and staff within the campus on a daily basis.