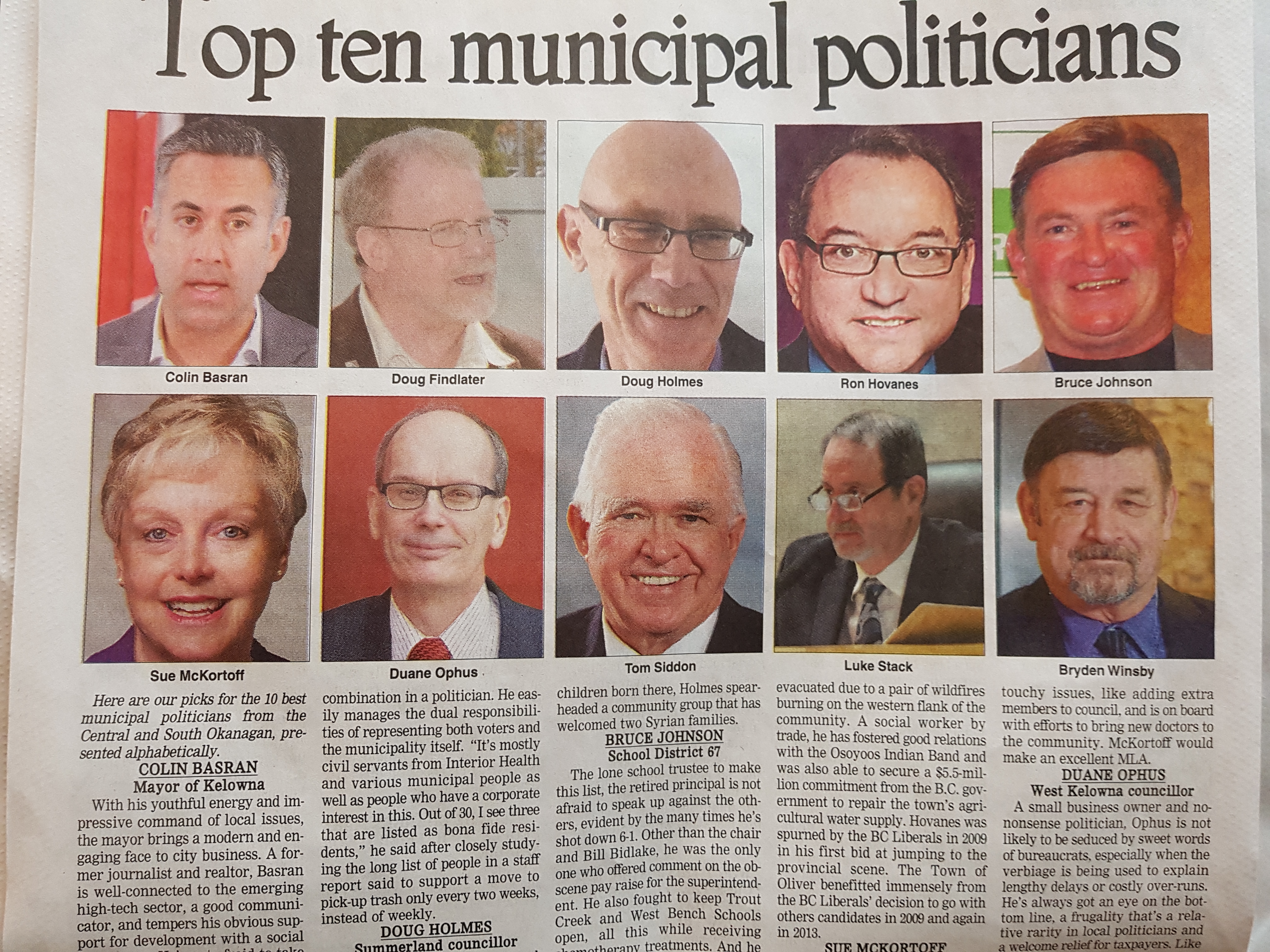 This article was published in the Okanagan Weekend paper on January 13, 2018. I was pleased to be recognized. 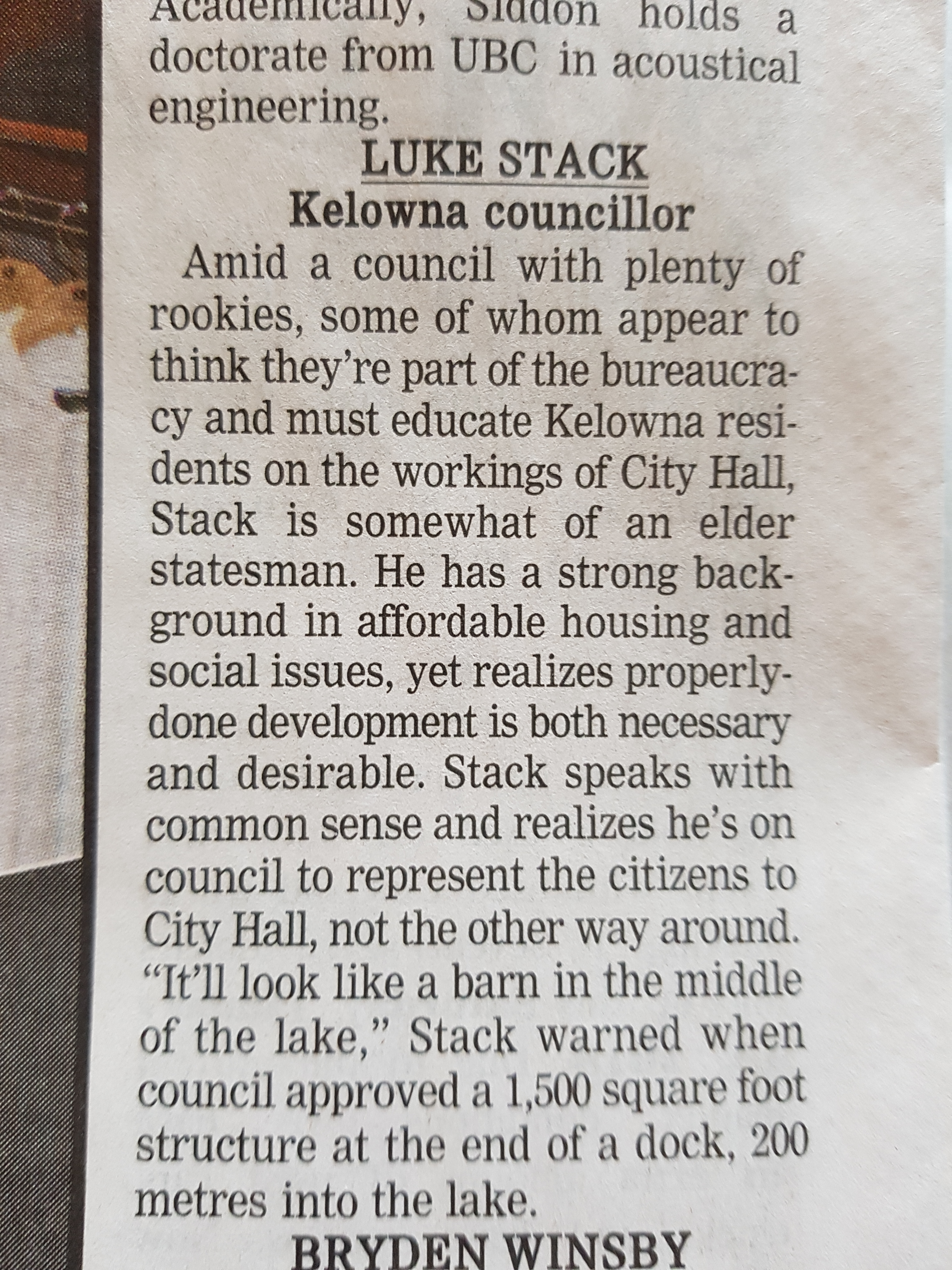 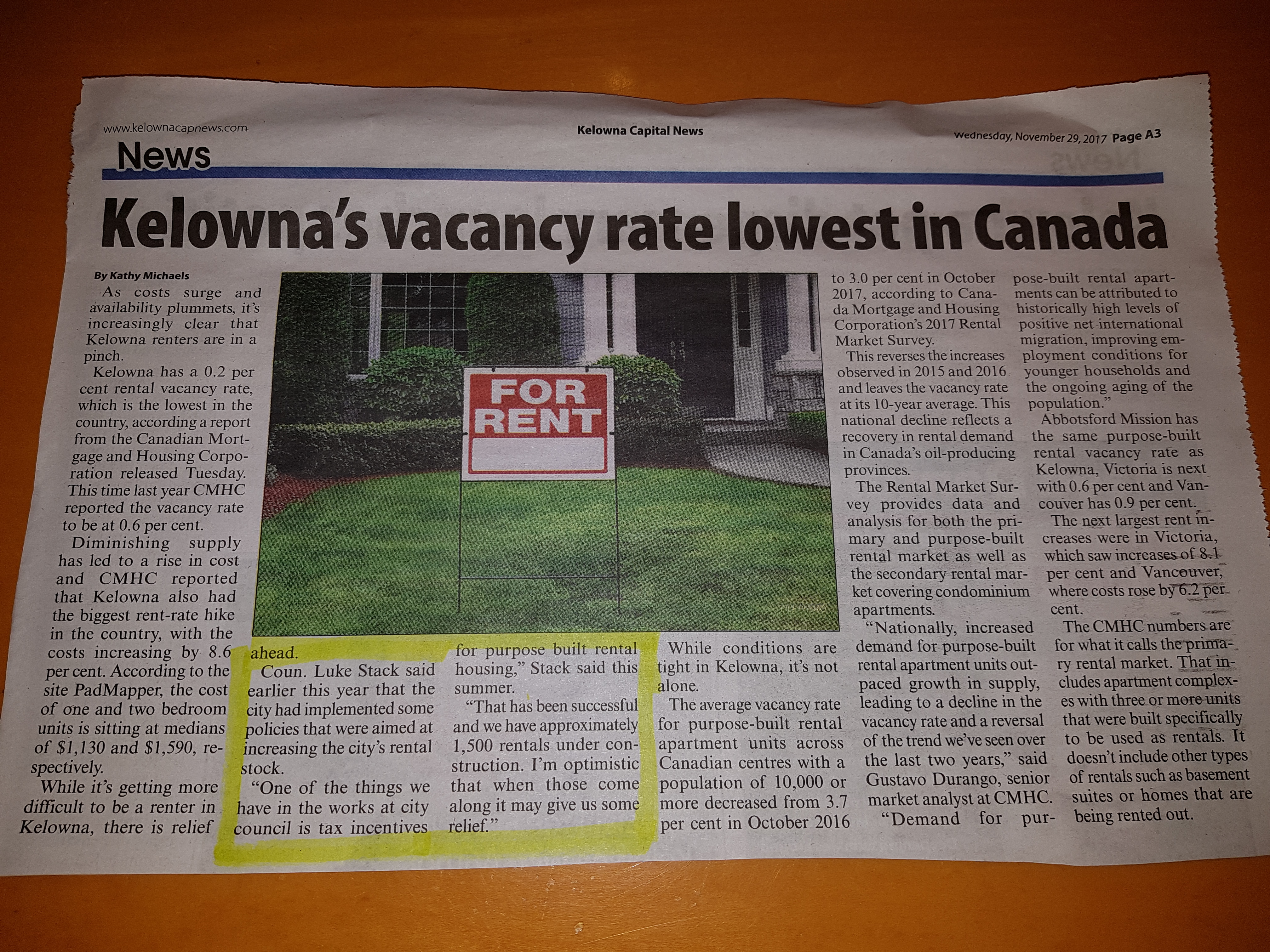 I am really pleased that this new gas heater will warm everyone up at Stuart Park this winter. Thanks to our City staff for taking the initiative. 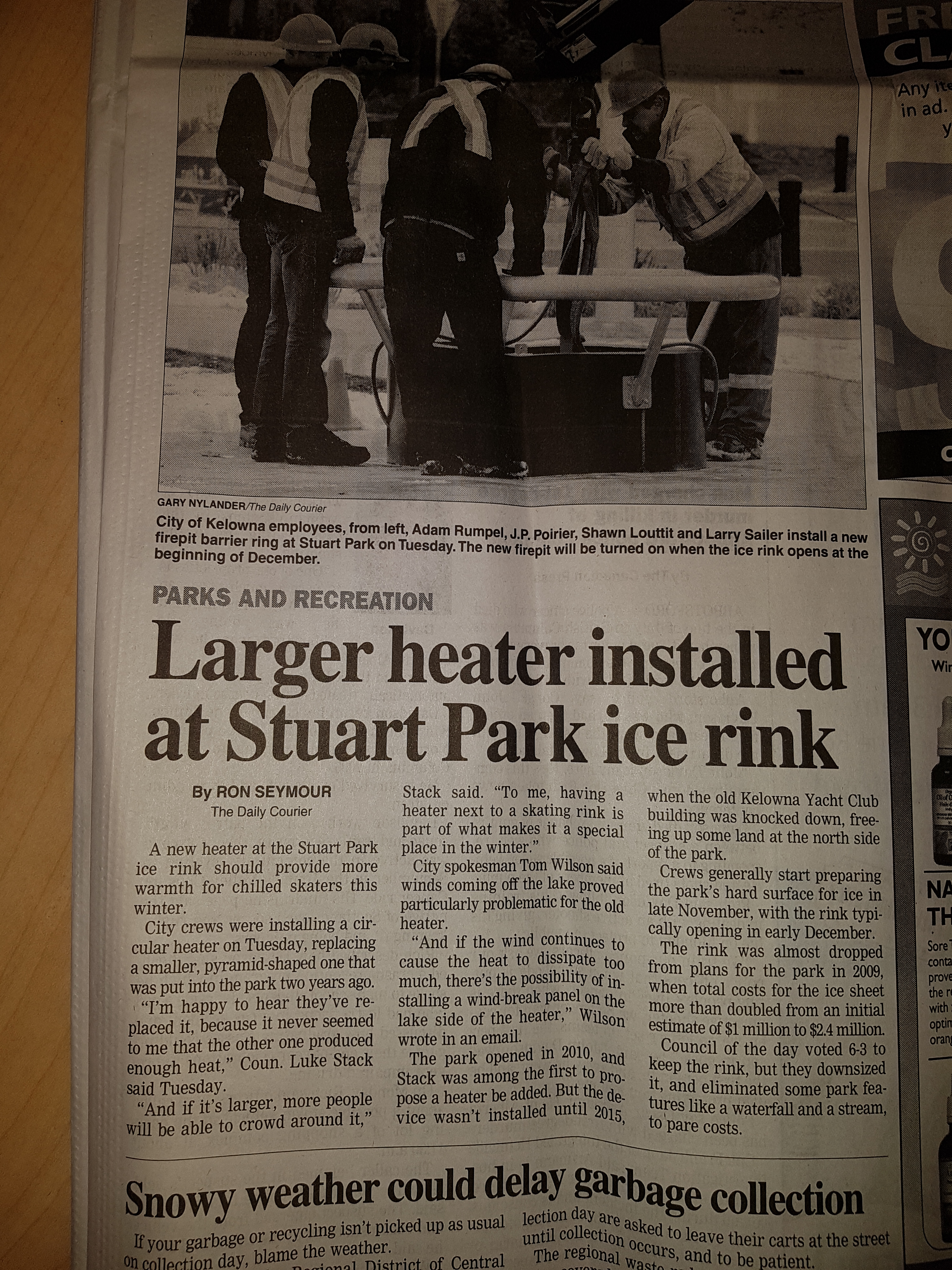 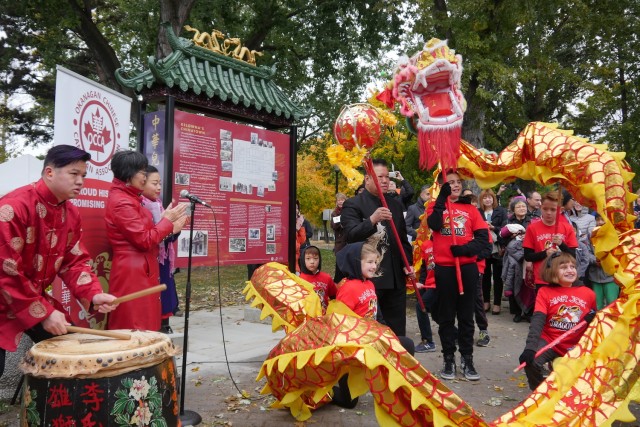 Photo: Nicholas Johansen (From Castanet)
A celebration was held Saturday for the unveiling of a new sign honouring Kelowna's Chinatown. An important part of Kelowna's often-overlooked history is now on display at the entrance to City Park. An unveiling celebration was held Saturday morning for a new sign, outlining the city's historic Chinatown and the contributions Chinese-Canadians have made to Kelowna.

One of the speakers at Saturday's event was Tun Wong, a longtime Kelowna resident who was born in Chinatown, which used to be enclosed by Harvey and Leon avenues and Abbott and Water Streets. Wong's mother, who was born in China, moved to Kelowna as a child in 1929 and raised Wong and his 10 siblings in Chinatown. “I've tried for years to try and get a plaque or a sign to designate Kelowna's Chinatown to honour its past residents and the sufferings they went through,” Wong said Saturday. “This sign has far exceeded what I ever had in mind.” The last of the buildings in Kelowna's Chinatown were demolished in the 1970s, but the new sign will preserve this history for generations to come.

The sign was designed by Arthur Lo, a retired Kelowna art teacher who sketched the design in 30 minutes during an Okanagan Chinese Canadian Association meeting in 2015.

After two years of planning, the sign was finally installed Friday.

The $32,000 sign was funded in equal parts by the Okanagan Chinese Canadian Association, the City of Kelowna through the federal government's Canada 150 grant and the Central Okanagan Foundation. 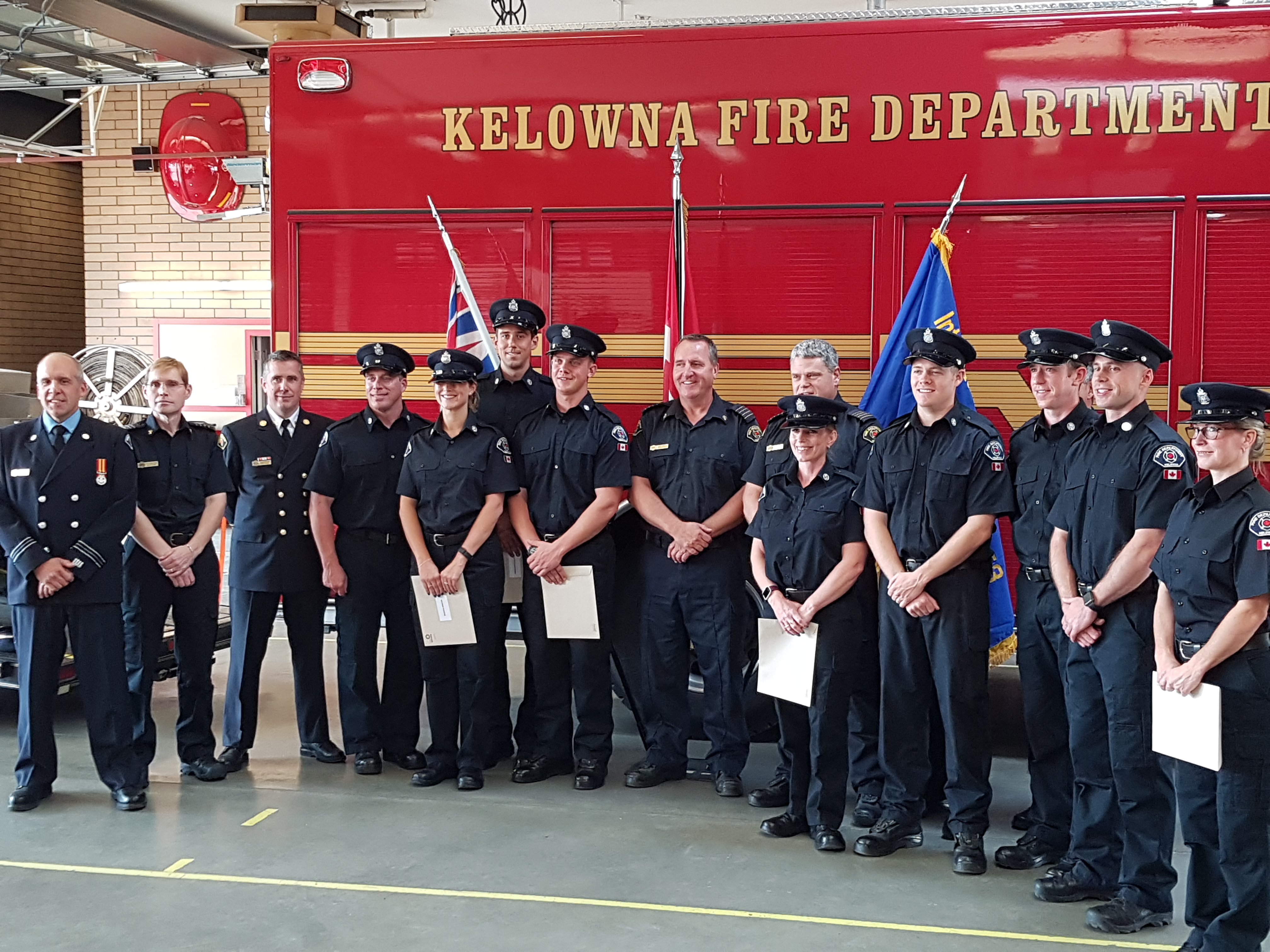 Congratulations to Kelowna's newest recuits. These men and women are joining the Kelowna Fire Department. Today they participated in a ceremony marking the completion of their training. Each was awarded an official hat to mark the transition.  Chief Whiting,and all in attendance, were proud to welcome them to the Kelowna Fire Department as both Fire Fighters and Dispatchers. 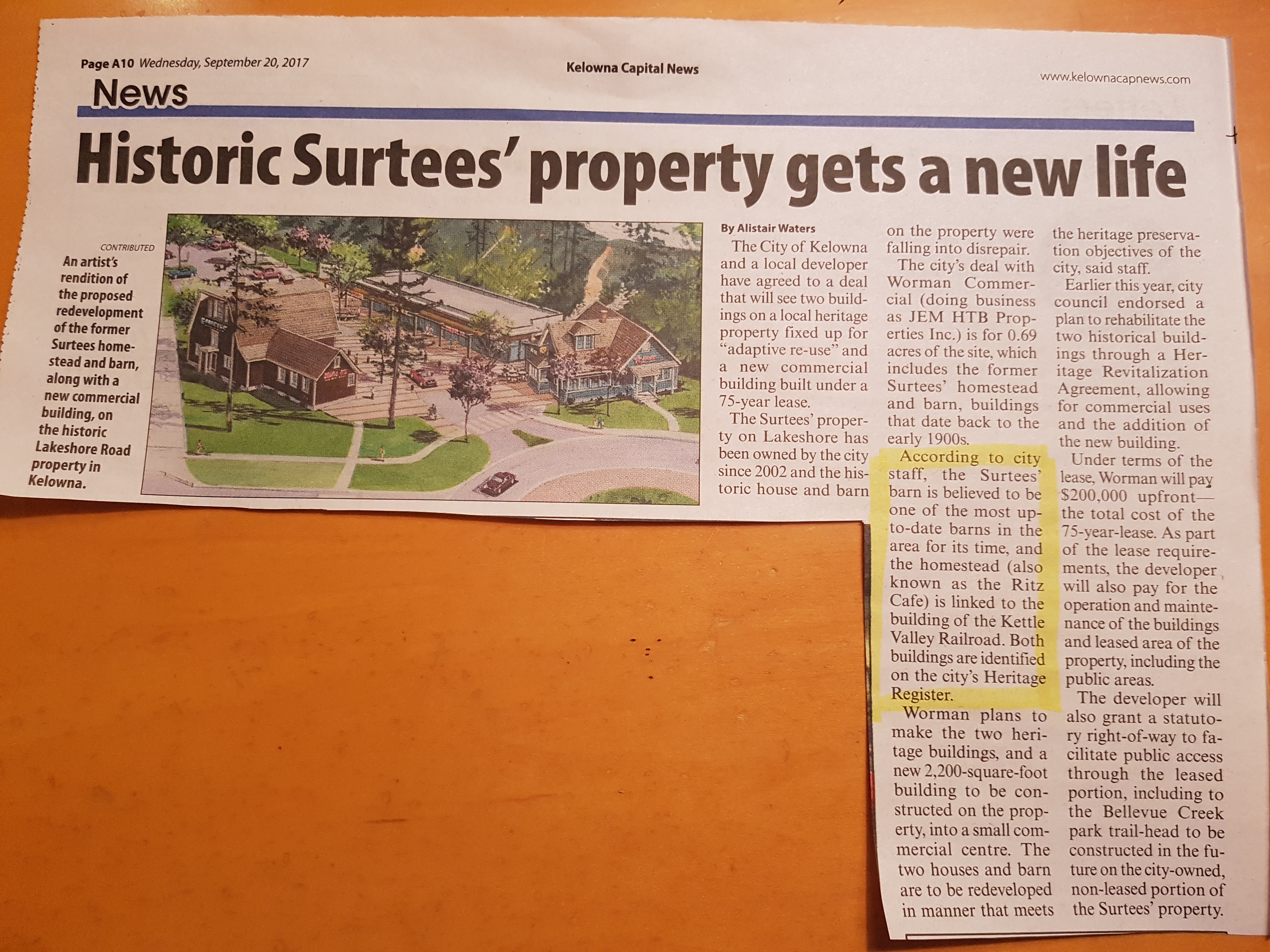 From Castanet By Wayne Moore

It's been 102 days – and counting. That's how long the Central Okanagan Emergency Operations Centre has been up and running since floods first hit the region in early May.

Kelowna Coun. Luke Stack, sitting in as acting mayor Monday, took the opportunity to thank those who have put in time at the EOC to ensure residents are safe. "They have been doing double duty, as many have been seconded from their regular daily work to take on additional responsibility within the EOC," said Stack. "These folks, for those who don't know, are doing their regular job, and manning the Emergency Operations Centre."

The EOC was activated on May 5 after heavy rains the night before, combined with snowmelt, caused massive flooding throughout the region.The centre also pulled double duty last month after a wildfire in Okanagan Centre displaced hundreds and destroyed eight homes.

Kelowna city manager Ron Mattiussi, who helps oversee the centre, says the real story within those walls is the fact it's been a regional approach. "If you walked into the EOC on any given day, there would be a communication person from Kelowna, or Westbank First Nation, or West Kelowna and an engineer from Peachland," said Mattiussi. "It really was the strength that we could call upon the whole region, and the whole region responded by sending people who were pretty busy, to fill in."

Stack said everyone looks forward to the day when the EOC can be decommissioned, "and our lives can return to normal." While the flood danger has passed, the EOC will remain operational until cleanup is complete.

RCMP Get a new Home 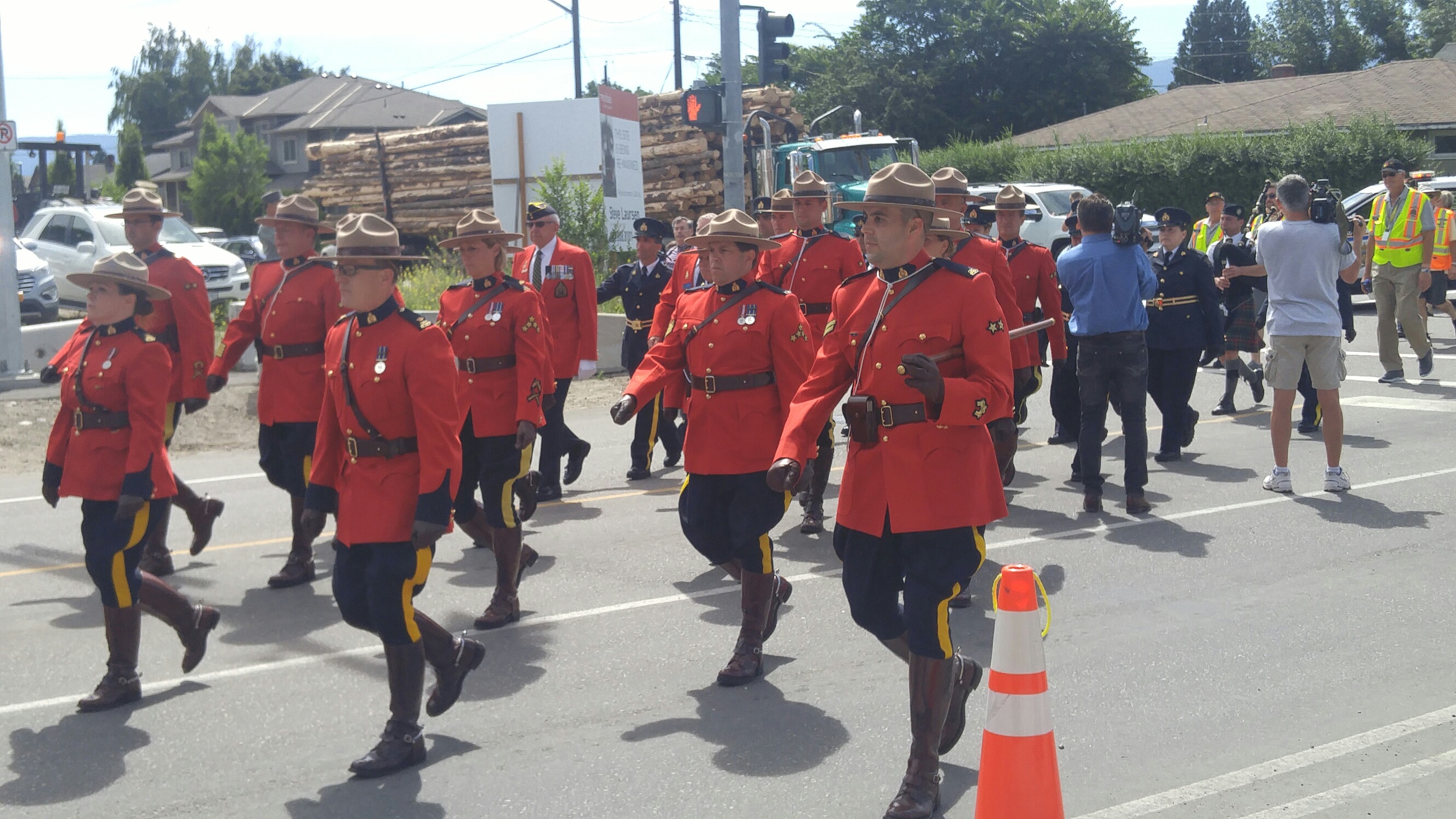 (Castanet) Kelowna RCMP officers marched through downtown streets to their new headquarters, Tuesday. Dozens of passers-by stopped to take in the parade of Mounties in red serge, auxiliary constables, RCMP volunteers and civilian staff from the regional detachment area.

"This is a really big deal for our community. Most importantly, this will allow the RCMP to do their jobs more efficiently and make our community safer," said Kelowna Mayor Colin Basran.

"It's a very proud moment for myself and the other employees of our building to move into such a state of the art facility. This is the first opportunity I have been able to work in a new detachment," said said Supt. Brent Mundle. "The citizens of Kelowna and the city council have done an outstanding job at providing us with a professional building to do police services from.

"I am pleased to have played a small part in securing this new building for the RCMP."  Luke Stack 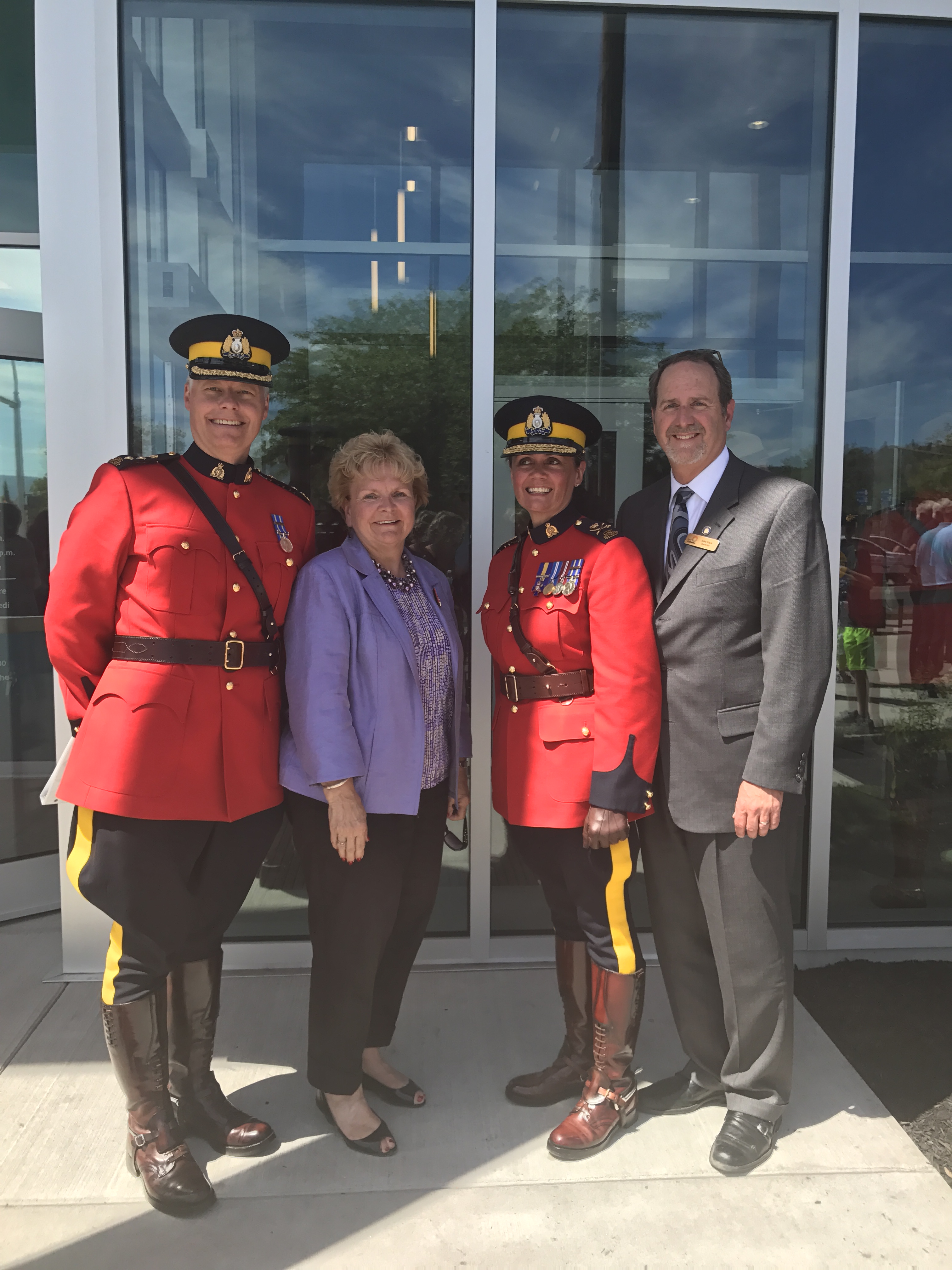 The Regional District of the Central Okanagan and the Westbank First Nation signed a Memorandum of Understanding for the protection and conservation of cultural heritage sites in the Regional Parks. Pictured here is Chair Given and Chief Roxanne Lindley signing the official documents. This is another important step on our journey of reconciliation with indiginous people in our region. I was honored to be a Board member of the Regional District and support this important initiative. (Picture taken at Two Eagles resort) 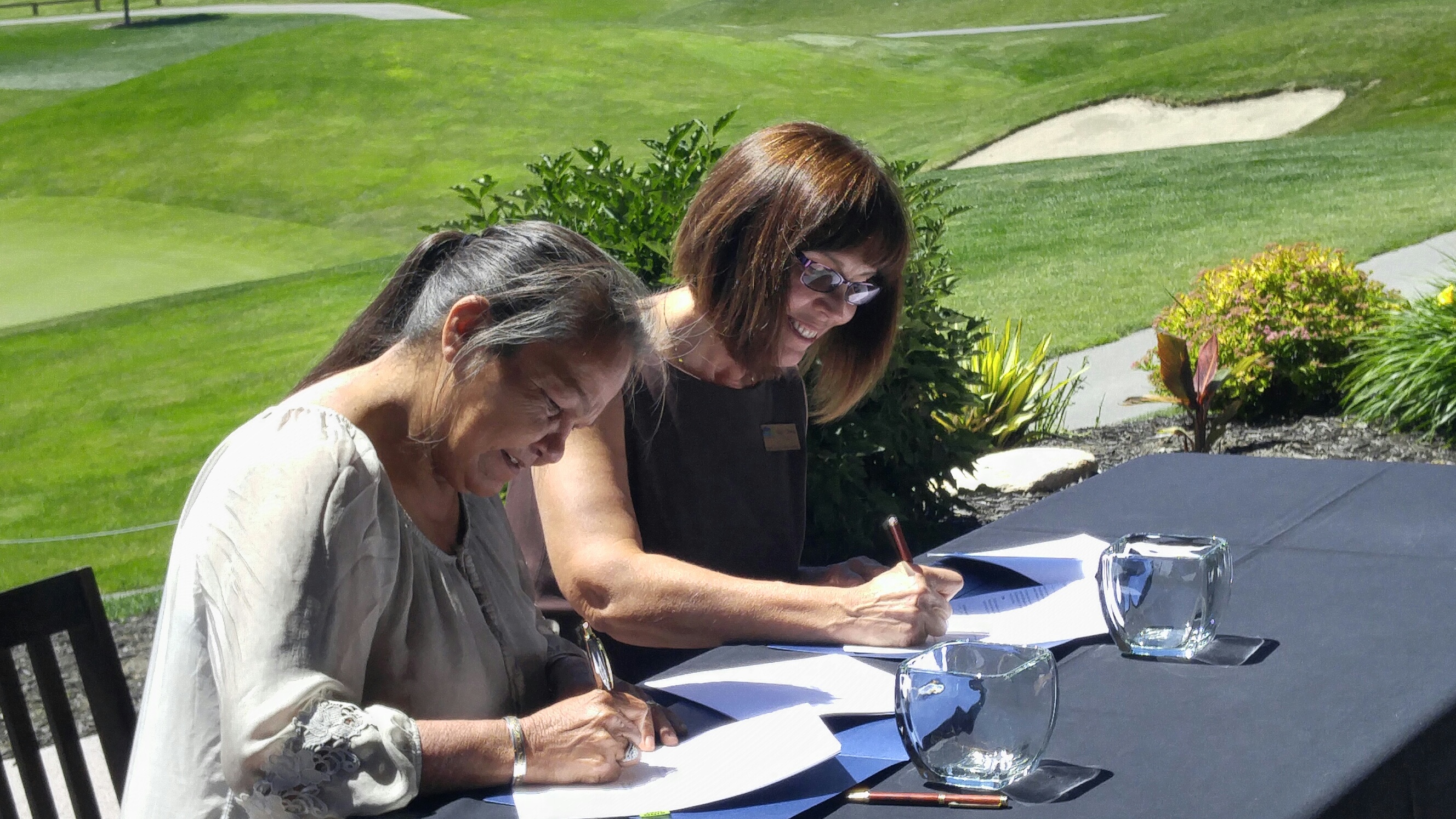 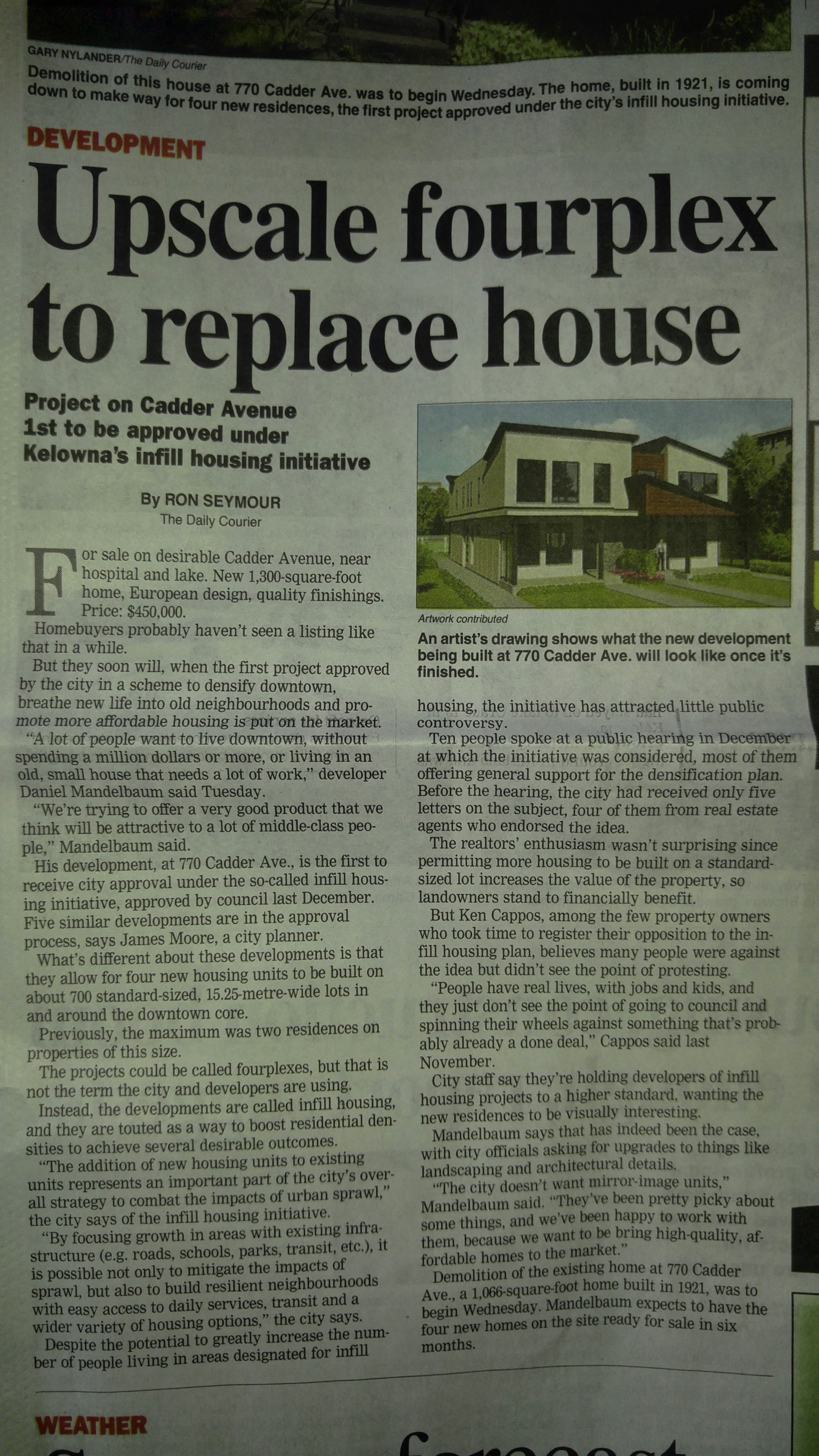